Unpacking the Idea of Democratic Spaces

Coming out of the tail end of the COVID-19 pandemic where so many people suffered from social isolation, human connection and shared experiences feel more urgent than ever. One way to achieve such experiences is to embrace the idea of democratic spaces. This term describes spaces that are shared by the public for the free enjoyment of all. Below, we take a closer look at how the term came to be and what it looks like in action.

The idea of democratic space has historically thrived in Brazilian architecture and design. To break it down: democracy itself is a system that ensures plurality and representation in politics and society. Democratic space, then, becomes any space that invites multiple groups to equally decide how they’d like to use the space, and then do so freely.

Late Modernist architect Lina Bo Bardi was one such Brazilian figure who advocated for more democratic spaces. Most notably, her work in creating vital cultural centers in the region demonstrated the philosophy in action: these were places where tolerance, equality and freedom drove design.

In an interview with Fora, professor and critic Guilherme Wisnik discussed how, if public space is a source of conflict (i.e. how should it be used and by whom), then this conflict is a virtue. Conflict and debate give way to the opportunity to better understand a wide variety of diverse people and diverse needs, and approaching space democratically allows architects and urban planners alike to use space as a "theater for the mediation of differences."

Anytime you bring a residential development to a community, there’s a balance to be struck between creating a private haven for residents themselves, as well as adding value and resources to surrounding community members.

At Optima, this moral consideration plays out in several ways. First and foremost, we’re committed to bringing beautiful buildings that pay respect to the surrounding built and natural environment alike. Ours are communities designed with the existing climate and available, sustainable materials in mind – and through landscaping, we’re always thoughtful about bringing visual beauty and increased greenery to the neighborhood. 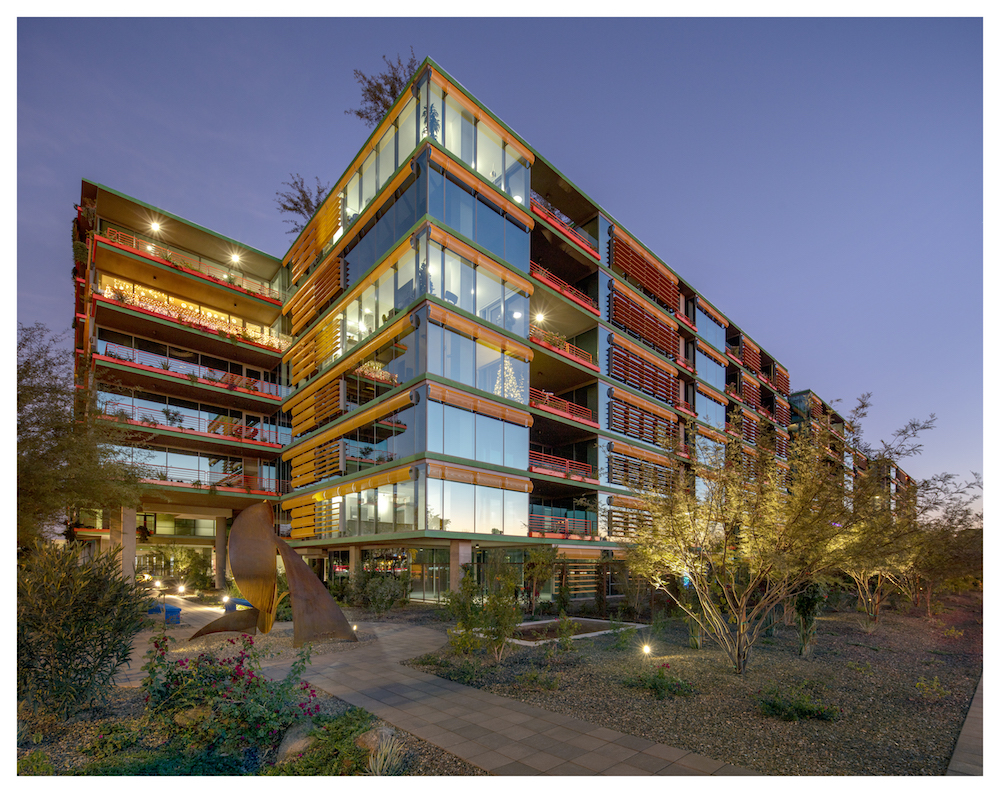 Public art is also a component of what we do at Optima. Many of our communities feature original sculptures by David Hovey Sr. In fact, Optima Sonoran Village is home to an entire sculpture garden for all in the area to enjoy. Beyond the sculpture garden, Optima Sonoran Village incorporates lushly landscaped open spaces, which are interconnected with the central courtyards allowing public pedestrian access along pathways into and through the development. Located on the boundary of the Downtown District, the pedestrian areas are designed to accommodate and encourage a visual and functional connection of the adjacent neighborhoods with the Camelback Corridor and Downtown Scottsdale.

Meanwhile in downtown Chicago’s Streeterville neighborhood, the plaza out front of Optima Signature brings an unusual public space to a densely developed area. Kiwi, an original David Hovey Sr. sculpture swathed in a brilliant shade of yellow, is a feature that invites passerby to stop and linger for a while. In addition to the public art sculpture, the plaza at Optima Signature also features a long stretch of lushly landscaped gardens, perfect for an inner-city stroll.

As we come out of these challenging times, design has a crucial role to play in creating opportunities for connection and community just like these.